Multiple Choice Question:  What do Uber, MiraMax, and Donald Trump’s White House have in common?

A:  An erratic leader who seems to thrive in conflict

B: A leader who disrupts, shames, or embarrasses the team rather than inspires them to greatness

C: A leader who believes he, alone, has the vision and business acumen to ensure success

D: A leader who hasn’t adopted some of the wisdom of business leadership greats

E: All of the Above

According to an article by Time magazine’s executive editor Matt Vella, Uber’s fate, and how it works its way out of this mess “will be the stuff of business -school case studies for years to come.”  It’s no stretch of the imagination to also conclude that how Trump works his way out of his current mess will also be the stuff of poli-sci case studies for years to come. What Donald J. and Uber’s Travis Kalanick seem to have in common is a true lack of humility, hubris, or belief that they are regular humans like the rest of us.

Maybe that’s going too far. It’s true that they are not regular humans like the rest of us. Trump lives in a golden palace , or makes his abode into a golden cage wherever he puts his head down.  Kalanick may not be as attracted to gold, but he has his own ivory tower isolationist views. Both share a disheartening disdain for the sanctity of womanhood, an unbridled arrogance, and a belief that they can get away with anything. And why not? Up until now, it’s been largely true. 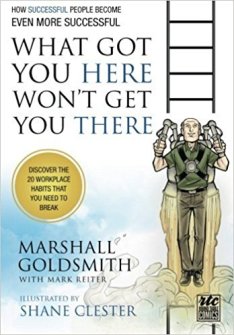 Both would do well to study Marshall Goldsmith’s business text What Got You Here Won’t Get You There. If reading a book is too much of a heavy lift at least for the Donald, the work now comes in comic book form. Seems there’s a real need to dumb down all high ideal concepts these days, even though Goldsmith’s concepts are fairly simple: the skills it takes to get you to the top are not the same skills needed to stay on top, lead others, or create an effective team.

Michael Gerber proposes a similar concept in his business classic The E-myth revisited. Geared especially for smaller businesses and entrepreneurs, it proposes the skills needed to be a great start-up entrepreneur are the very skills that will stop you from growing a start-up into a sustainable business in the long haul. For one thing, you have to learn to delegate and let others do some of the heavy lifting.

Ironically, Donald J. won his way to the White House partially on the premise that he was a great businessman.  Data suggests otherwise.  The Washington Post has reported that Trump’s business growth is largely underperforming his peers. He considers litigation a business tactic, with a minimum of 4000 lawsuits under his belt and has no problem declaring bankruptcy to force a restructure of his enormous debt.  In Atlantic City, he’s also known for stiffing small contractors and leaving others holding his empty bags.

Most recently, the Trump Taj Mahal is being auctioned in bits and pieces, but it’s not his first, but third casino in Atlantic City to fail. Meanwhile, another businessman and TV personality, Tilman J. Fertitta, has transformed Trump’s first failed Trump Plaza casino into a vibrant Golden Nugget. Where Trump failed, Fertitta is succeeding.

So, if Trump and Kalanick aren’t willing to learn from the greats or hit the books maybe the rest of us should.  What got us into this mess — politics as usual, political parties out of touch with the common man, poor civics education in our public schools — will not get us out. We’ll need to rethink how we engage with each other, teach our children, and restore our

What are some small steps we can all do to get started? Here are some suggestions:

The point is to keep moving forward, or as Winston Churchill once said: “If you’re going through hell just keep going.” The point is to come out the other side — to have legislation and legislators who represent our wishes as a democratic nation. And, to remember that what got us here — from great founding fathers and some great presidents to flawed presidents and our current president — may not get us where we ultimately want to go. That will take “We the People,” working together, collaboratively, with shared vision for many years to come.