It seems everyone these days wants us to stay positive, to be proud of how far we’ve come and the great American experiment regardless of Bunsen Burner mishaps we may be experiencing in our real-life lab. One voice that resonates is historian David McCullough’s with his new book, “The American Spirit: Who We Are and What We Stand For. ”  Not really a book at all, the tome is a compilation of some of his short and sweet motivational speeches to various groups of people of all ages. 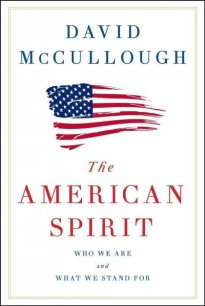 becoming naturalized on July 4, 1994.  In it, he broaches how “these truths” we now hold to be “self-evident,” from the Declaration of Independence were never evident at all anywhere in the world up until the time of the American revolution.  And, that the real revelation from the Declaration comes a sentence later when Jefferson writes: “That to secure these rights [the unalienable rights of Life, Liberty and the Pursuit of Happiness]… Governments are instituted among Men, deriving their just powers from the consent of the governed…”

That, argues McCullough is the true genius of the document. “Never, never anywhere [sic],” he writes, “had there been a government instituted on the consent of the governed.”

This past weekend, my family spent time in the newly opened Museum of the American Revolution in Philadelphia.  It is well worth the visit.  Besides a great remembrance of all that went into the revolution, Washington’s true leadership, and the amazing David and Goliath story of our nation’s birth, the museum respectfully addresses slavery, women’s subrogation, and the ongoing issue of Native Americans. Little did I know, that many slaves sided with Britain and King George who promised them freedom, and most Native American tribes also sided with the British, who set up boundaries to separate colonists to secure Native Lands. But, it makes sense.

Equally thought provoking were several areas dedicated to what the word “revolution” meant in colonial times.  As one exhibit panel stated: “They [the revolutionaries] rejected monarchy as a form of government. Instead they fought for the right to rule themselves. They called their movement a ‘revolution.’ By this, they meant a new turn in history, a new way of looking at the world.”

The word revolution always felt uncomfortably close to anarchy to me, but, now, I’m softening to it. Perhaps it just means a new way to step up and take our turn at being involved and trying to make a difference. And now, Bernie Sander’s book title Our Revolution seems less incendiary as well.

If ever there was a time to visit Philadelphia, this can be it. It may not turn you into a cockeyed optimist, but it may turn you into a revolutionary.  It’s truly not the worst thing that can happen and may just encourage you when it’s next your turn at bat.

Patience doesn’t come naturally to many of us. One might consider meditating on the word if one had the patience to sit there quietly for more than a minute. Sadly, I don’t.

4 Lessons From Too Many Hospital Visits

Four hard lessons we all learn when a loved one ends up in the hospital with serious ailments.